Our tour begins with a meeting at Kopitnari Airport, near the city of Kutaisi. This is the center of one of the most beautiful regions of Western Sakartvelo, called Imereti. At the beginning of our trip, we go from Imereti to the southern region of Sakartvelo, which is called Samtskhe-Javakheti, and visit the balneological resort of Borjomi, which is known worldwide for its unique Borjomi mineral water. We visit the central park of Borjomi, located in a beautiful 900 meters long gorge, where the source of Borjomi mineral water is. It was called Yekaterininsky after the name of the daughter of the governor Yevgeny Golovin after she’d recovered from this mineral water. There is also the first Borjomi mineral water bottling factory, which was built at the end of the 19th century and now presents a photo exhibition of the old park and the city. The park has a beautiful waterfall falling from the upper plateau of the park. From Borjomi, we continue on to the south of Sakartvelo towards the city of Akhaltsikhe – “New Fortress” in translation from Georgian. It was founded in the XII century, but the settlement itself has been known since the IX century and was called Lomsia. In the first half of the XII century, the Rabati fortress, which gave the name to the city, was built here by princes Dzhakeli, who ruled the region in those days. This region has always been attacked by Persians, Mongols, Turks and therefore many fortresses were built along all the gorges. The most famous of them is the city in the rock – Vardzia of the XII century, the fortress of Tmogvi of the X century and the fortress of Khertvisi of the X century, as well as many monasteries and churches, the most famous of which is Sapara of the X century, located 10 km from Akhaltsikhe. 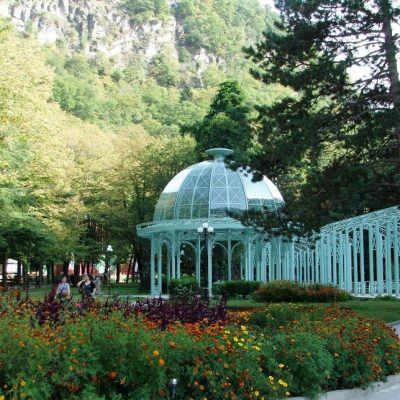 On the second day, we return to the Imereti region and visit the upper Imereti town of miners – Chiatura, where manganese ore is mined. The famous Pillar Katshi is nearby – a 45 meters high solitary rock at the top of which there is a monastery of a hermit of the IX-X century. We descend from the mountains to the Colchis Valley to the city of Kutaisi, one of the most ancient populated cities of Western Georgia. We visit the temple of Bagrat III, built at the beginning of the 10th century in the city center, on the mountain Ukemerioni. Later on we examine the night city center with a very beautiful fountain. 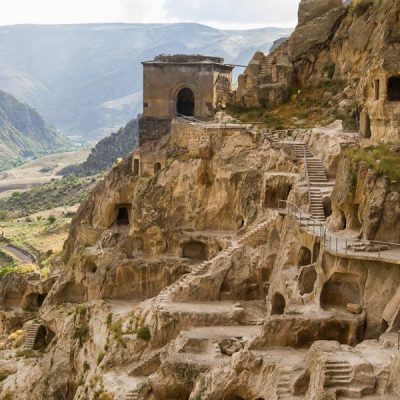 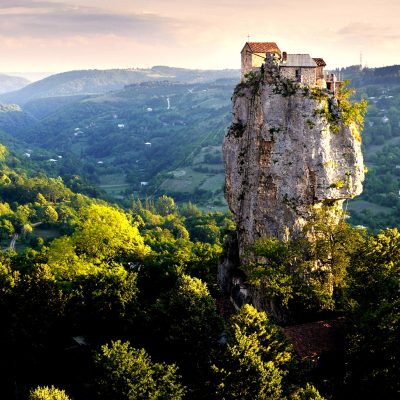 Continuing to travel around Imereti, we examine the most famous Gelati monastery complex with the academy of 12th-century, built by decree of the most famous king of Sakartvelo – David Agmashenebeli (Builder) on the Tskaltsitela River, a tributary of the Rioni River, the largest river in the West of Sakartvelo. Further our path lies in the direction of the mountain region Racha-Lechkhumi, which is famous for Khvanchkara wine and the mountain resort Shovi around which there are 12 sources of different mineral waters. From Imereti we get up to the Nakerala pass of 1220 m high, located on mountain Tskhra Dzhvari (Nine Crosses) with a height of 1565 m, from where a beautiful view of the Tkibuli Hydroelectric Power Station, the Colchis Valley and the ridge of the Borjomi-Kharagauli Park opens. We descend from the pass towards the Racha-Lechkhumi region to the very beautiful Shaor reservoir (some call it Shaori Lake), built on the Shaora River. Continuing the journey through the Racha region, we go down to the district center Ambrolauri, around which the vineyards of the famous wine varieties Aleksandreuli and Dzhumuretuli grow, from which Khvanchkara wine is made. Then we drive along beautiful gorges with beautiful views of the mountains and the surrounding area towards the town of Oni and rise towards the resort of Shovi. In the evening we return to Kutaisi. 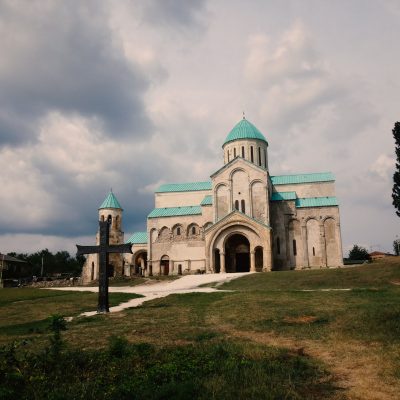 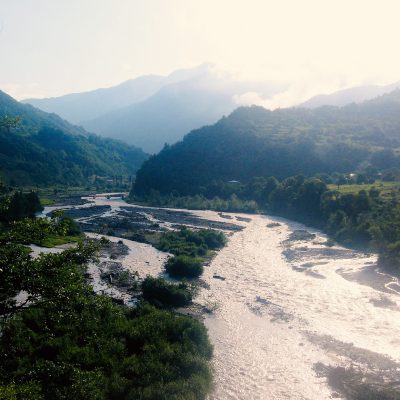 From Kutaisi we will go towards the resort of Tskhaltubo, which is known for its thermal mineral waters with a temperature of 35-37 degrees, mud clinics and karst caves. The city developed as a resort and reached the greatest development in 1950-51, when 19 sanatoriums, 9 complexes with therapeutic baths, a spa park and the Institute of balneology and physiotherapy were built. These waters treated the following diseases: nervous system, cardiovascular diseases, skin, gynecological, rheumatic, etc. In karst caves bronchial asthma, angina pectoris, hypertension and chronic pneumonia were treated. The city was divided into three parts: balneological, sanitary and residential. The caves of Prometheus, which we will visit, were opened for tourists in 2011 and represent only 10th part of all the caves, which are called Kumistavi. At the moment, 5 caves are opened, in which we will move on foot and two caves with an underwater lake, on which we sail in boats. After visiting the caves, we move forward to the Samegrelo-Zemo Svaneti region and go to it’s central city Zugdidi, where we visit the palace-museum with the Botanical Garden of the Princes Dadiani, who ruled this region. After visiting the museum, we continue our journey towards the mountains in the Zemo Svaneti region and our first stop is near the highest hydroelectric station in Europe – the Enguri station with a height of 272 m on the Enguri river. From the highest viewing platform we will enjoy the beauty of the mountains and reservoir. Continuing the journey along the mountain road, we stop at beautiful mountain waterfalls and make a stop near one of them for a picnic in nature. On the way there are a lot of beautiful landscapes of mountain ranges and gorges from which mountain rivers flow into the Enguri River, since our path lies along this river to the village of Mestia. In good weather, the highest mountains of the region are visible – this is Ushba with a height of 4700, Laila with a height of 4100, in the village itself – mountain Tetnuldi with a height of 4852 m, in the mountain village of Ushguli – the highest mountain in Georgia – Shkhara with a height of 5193 m. We will spend the night in the village Mestia, which is located at an altitude of 1,500 m and is surrounded from all sides by the beautiful mountains of the Greater Caucasus Mountain Range. 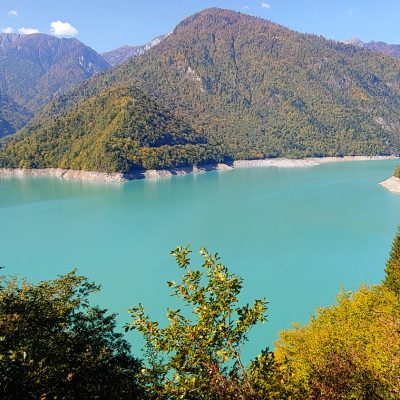 In the morning, we continue our journey along Svaneti and go by jeeps to the highest populated village in Europe – the high mountain village Ushguli. There are the oldest Svan towers and the ancient Church of Our Lady, in Svanese – Lamaria, built in the 11th century, located at an altitude of more than 2200 m and from where Mount Shkhara is visible. This village is listed as a UNESCO World Heritage Site. We return to Mestia and visit the house-museum of the Margiani family community, where the heritage of life of the ancient Svans is preserved and you will see and hear from the local guide how the ancient Svans lived. 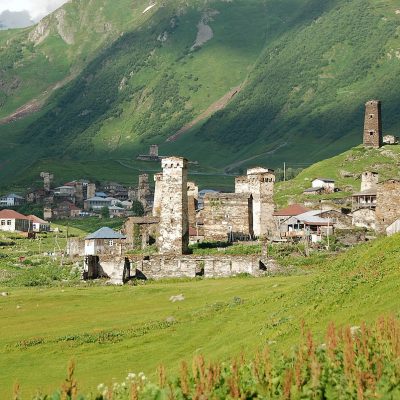 In the morning we descend from the mountains along the same road we arrived to Mestia and continue our journey towards the Black Sea to the city of Batumi. Along the way, we will enjoy the views of plantations of subtropical plants such as tea, tangerine, orange, lemon, kiwi, feijoa and other subtropical plantations. Before reaching the city of Batumi we will visit the Batumi Botanical Garden, located on the Green Cape and descending from top to bottom with terraces. The territory of the park is very large and covers an area of ​​113 hectares. There are 9 working departments, in which more than 5 thousand plant species grow. This garden was created by Academician A. Krasnov, who began to create this garden in 1880 and in 1912 the botanical garden was open to visitors. After visiting the garden, we will explore the center of Batumi, which is very beautiful at night. There are many fountains, old buildings intersecting with modern skyscrapers and all this shimmers with beautiful illumination. We spend the night in the resort of Kvariati, which is located a bit further from Batumi towards the Turkish border. 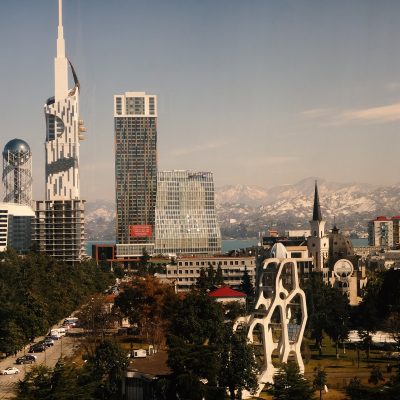 In the morning we have free time and can rest at the sea. After rest we go towards the mountainous Adzharia to the town of Makhuntseti and on the way we examine the beautiful mountain landscapes that this region is rich in. In the town of Makhuntetsi there is a very beautiful waterfall 50 m high, not visible from the road. As well we visit one of the 25 preserved arched bridges, built in the 12th century during the reign of Queen Tamara, along which the great Silk Road ran. On the way back to Batumi we taste wine at the Adjarian Wine House winery, which existed here in the 18th century and there are wines made from local grape varieties grown in Adjara. We return to the hotel and spend free time at sea. In the evening we go to Batumi, walk around the night city and spend a farewell evening in a restaurant with live music and Georgian folk dances. Overnight in Kvariati. 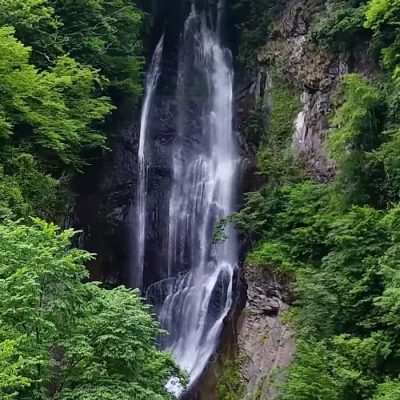 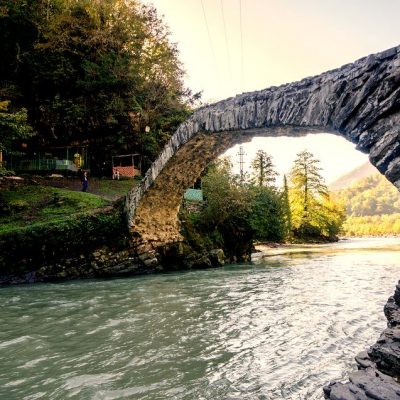 Early in the morning we say goodbye to the sea and leave to Kutaisi airport.

The cost depends on the group size:

What is included in price:

WhatsApp
Send via WhatsApp
We use cookies to ensure that we give you the best experience on our website. If you continue to use this site we will assume that you are happy with it.OkPrivacy policy